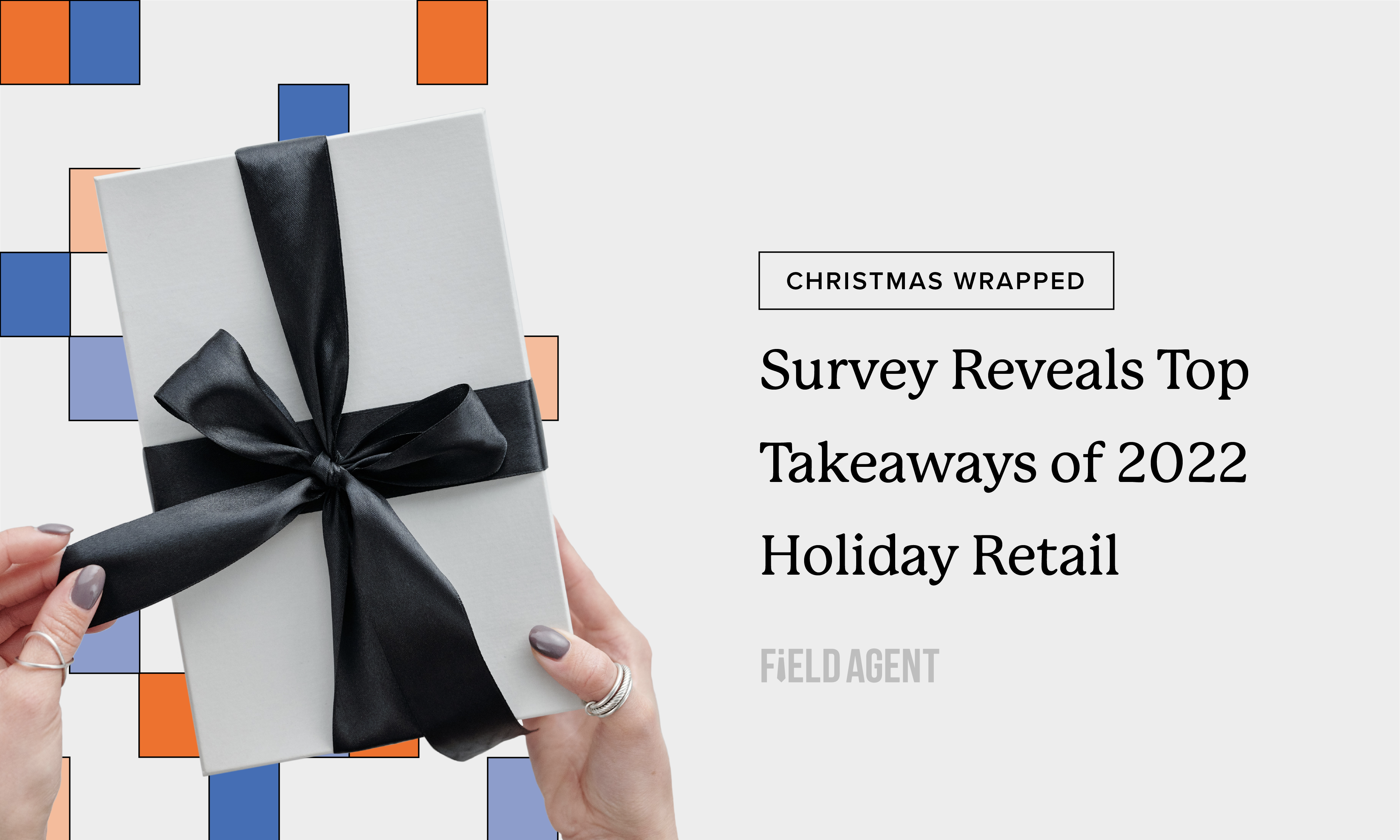 A question blared by millions of exuberant, wide-eyed kids each year on Christmas morning.

But with a new year upon us, and the holidays just behind, now it’s our turn as retail and brand professionals to ask, “What did we get?”

How did the 2022 holidays treat us and our companies?

We already know U.S. retail sales climbed 7.6% year-over-year for the time period November 1–December 24, according to a MasterCard SpendingPulse survey.

Can we get more specific, though? For instance…

Dusting off our laptops and returning to reality, here's what really went down during the 2022 retail holidays.

Especially when it comes to gift shopping and buying, Field Agent surveyed 1,207 shoppers* who purchased gifts during the holiday season just concluded to understand 2022 holiday retail activity. The survey was conducted through the Plum retail-solutions marketplace on January 3, 2023.

We particularly wanted to understand gift-spending and shopping around toys, and we also asked questions about holiday shopping in the most general sense.

Below is a quick look at the survey results across six key areas:


Let’s wrap-up the 2022 holidays together. Here's what you missed:

Wrapping It Up: Takeaways from the 2022 Holiday Shopping Season

As we shared already already, early indications suggest holiday spending increased year-over-year. Given the high inflation levels, this may come as a favorable surprise to retailers and the brands they sell?

But was it a surprise for shoppers, too?

It seems that way.

Looking back on their recent holiday spending, virtually half (46%) said they spent more on gifts than expected or planned this year, compared to 34% who spent less. You can see the breakdown: Impulse purchases, it seems, may have had something to do with the last-minute boost to holiday spending in 2022.

In our survey, fully 89% said they made at least one unplanned purchase of a gift this holiday season. While only 17% indicated that all or most of their gift purchases were impulsive in nature, 41% admitted that at least “a few” of their gift buys were unplanned.

Did shoppers give any of this spending back in the form of merchandise returns? Returns are big business—though not exactly welcomed—just after the holidays.

More than half (55%) of 1,170 households that received  merchandise-gifts in 2022 said they would not be returning any of them whatsoever.

(And to think you were worried about giving your aunt that set of oven mitts featuring the national parks. No? Just us?)

Another 33% suggested they would return only 1-2 items.

It also seems shoppers surprised themselves by how much they went online to buy gifts in the lead up to the 2022 holidays.

Indeed, more than half (59%) of respondents said they gift-shopped online more this season than they had planned, in contrast to only 16% who did so less than expected. 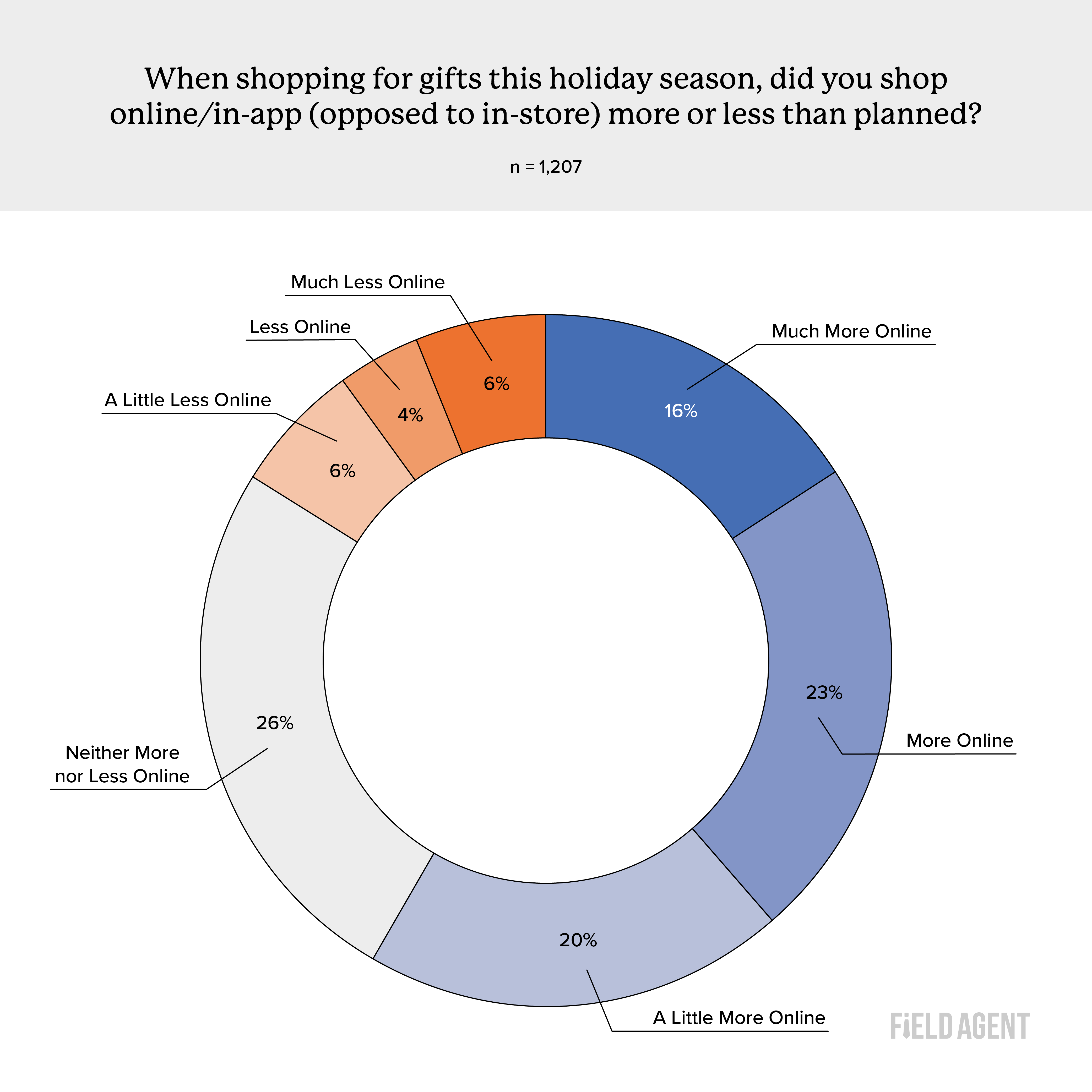 It seems things really “clicked” with holiday shoppers in 2022.

More about online gift-shopping, particularly toy-gifts, a little later in the article.

Fully four-in-five (80%) survey respondents said they purchased at least one gift for a child 18 years or younger this holiday season. These purchases were slightly more common for younger kids (e.g., ages 4-8) than older kids (e.g., 13+).

But surprise! (not really): Toys were the most common gift purchase for kids.

Among respondents who bought a kid’s gift for the 2022 holiday season (n = 969), 82% recalled buying a toy gift, compared to 65% who purchased a gift of clothing and 45% who gave electronics. 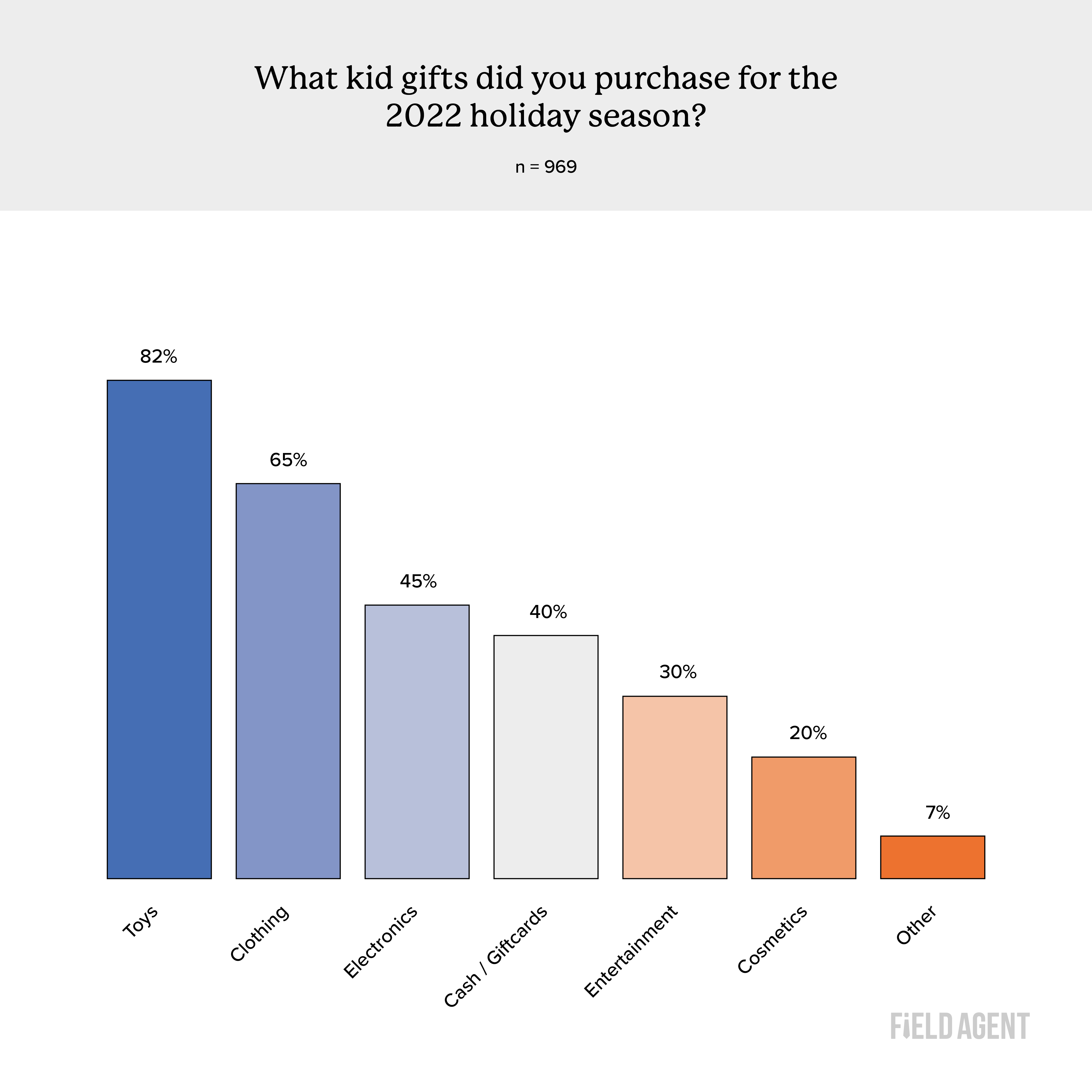 Interestingly, among holiday shoppers who purchased toys for kids this Christmas season (n = 790), 85% said they bought at least one smaller, “stocking-stuffer” toy of less than $10. Though only one-in-five (20%) said half or more of the toys they gave to kids during the 2022 holidays could be thus classified.

So what toy categories, specifically, enjoyed the happiest holidays?

Let’s break it down, girl vs boy:

It was a creative holiday for the gals. (Here’s hoping you have stain-resistant carpets and walls.)

Here we show the top 10 selections: 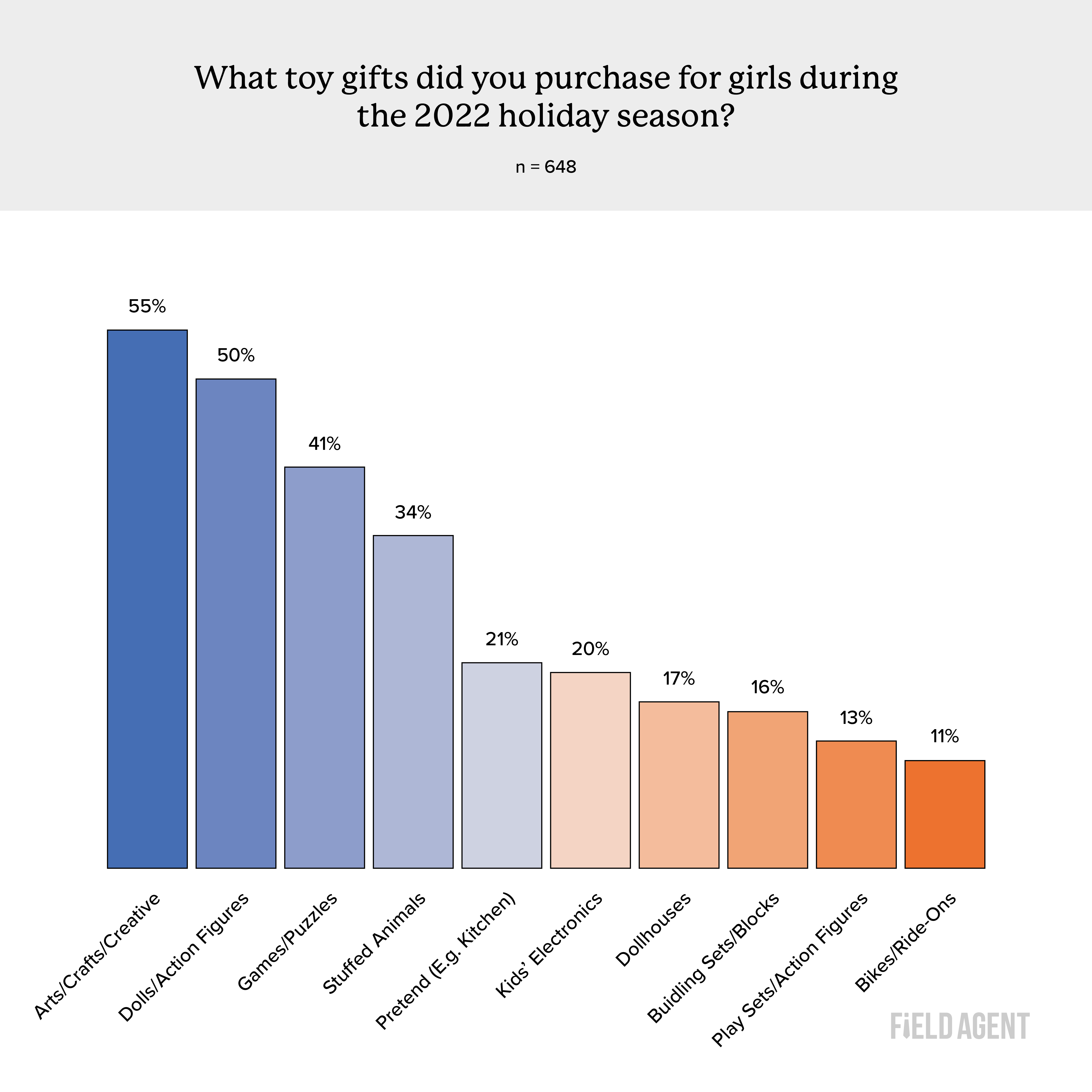 How do the boys compare?

We ultimately surveyed n = 687 shoppers who purchased toy gifts for boys. Of these, nearly half (46%) bought games/puzzles – the single most popular toy-gift given to boys this year. Compare this to building sets/blocks (39%), play sets/action figures (27%), and arts/crafts (26%). Careful where you step, parents. 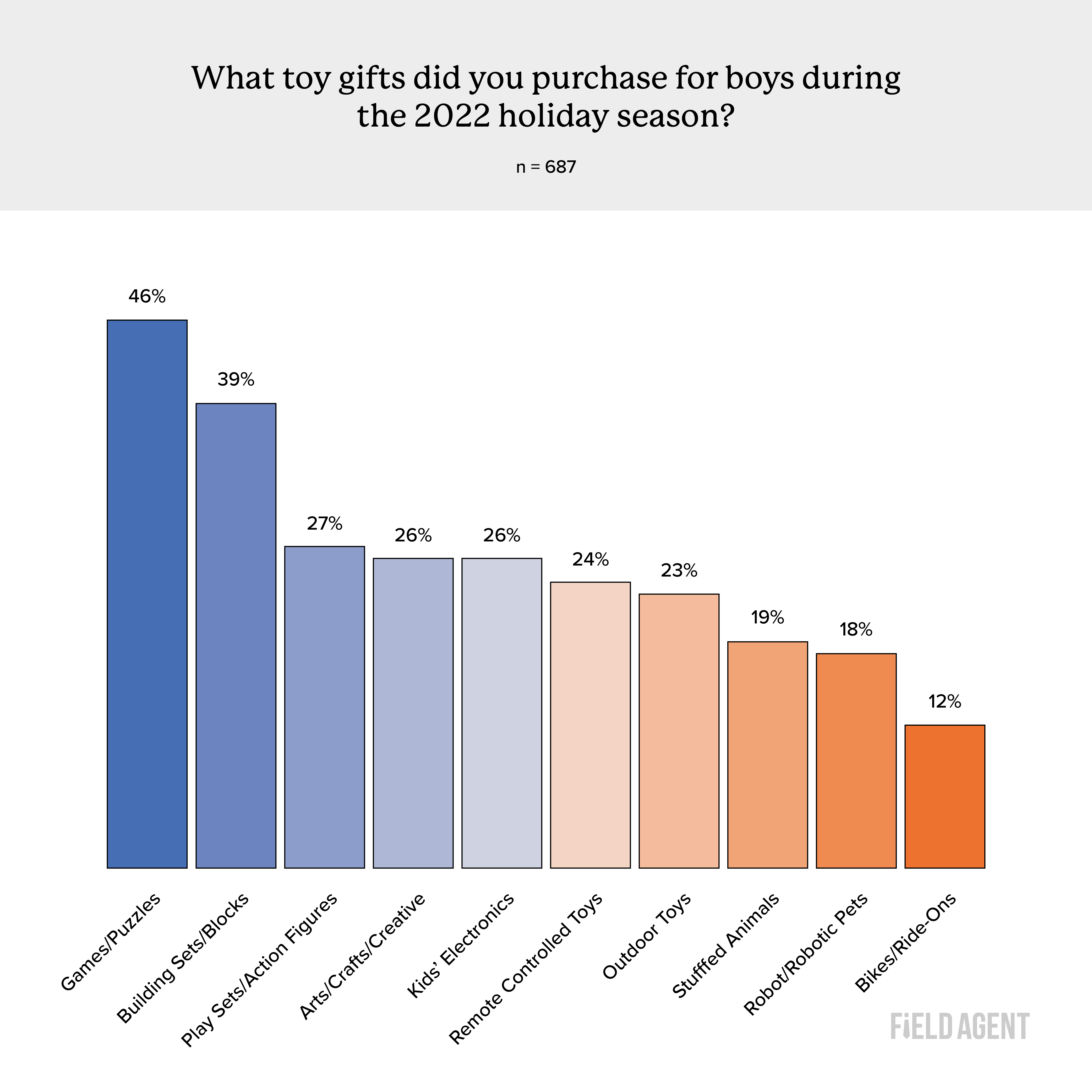 From the what to the why.

Understanding why shoppers buy the gifts they do is a worthwhile endeavor for survey efforts like this one, particularly when you can get to shoppers right after an event – before they forget their thoughts, motivations, actions, and the like.

We asked n = 790 respondents, all who bought toy-gifts for kids this holiday season, to identify the key influences on these purchases.

The kids themselves – “Mom, pleeease!” – were naturally the top factor. But, behind that, companies were able to effectively employ in-store signage/displays, gift catalogs, and online photos/video to convince shoppers to buy toys this season.

You can see the numbers below. 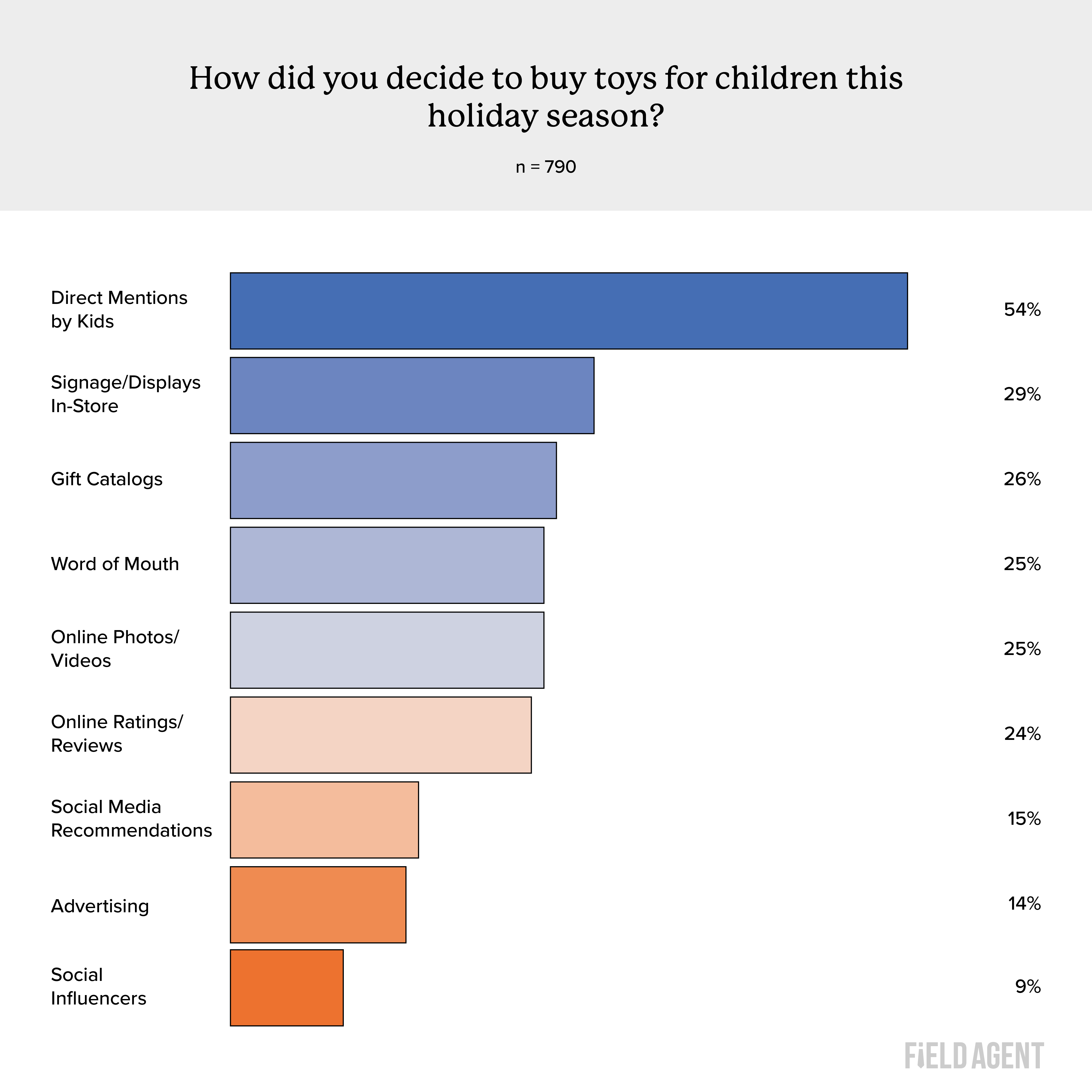 Respondents’ qualitative remarks only reinforce the quantitative data. We read plenty of comments like:

We were also curious to understand how holiday shoppers decided between two or more toys of the same type. In other words, what factor(s) persuaded the shopper to buy one toy over another, when the toys were similar in nature?

Of 716 respondents who felt they could respond to the question, 66% said they went with whichever toy had the “better price point,” while 47% said “better ratings/reviews” was the real difference-maker. Brand name was the deciding factor for 34%.

At one point we asked 711 shoppers to rank five factors by their relative influence over their online purchases of toy-gifts this year.

Surprise, surprise. As you can see, ratings and reviews easily received the highest proportion of #1 rankings as well as the highest number of #1 and #2 rankings (combined).

In 2022, ratings and reviews were absolutely critical to helping shoppers make holiday purchases of toys.

Did you know? Field Agent is an authorized provider of ratings and reviews to Walmart.com. Shop our R&R products on the Plum retail-solutions marketplace.

And where, might we ask, did these toy purchases transpire? That is, which toy retailers had the best 2022 holiday season?

We put the question to n = 790 holiday shoppers who purchased toy-gifts this year. In a channel-agnostic sense, Walmart and Amazon tied for top place. About three-in-four said they bought toy-gifts from Walmart, and about the same number from Amazon. 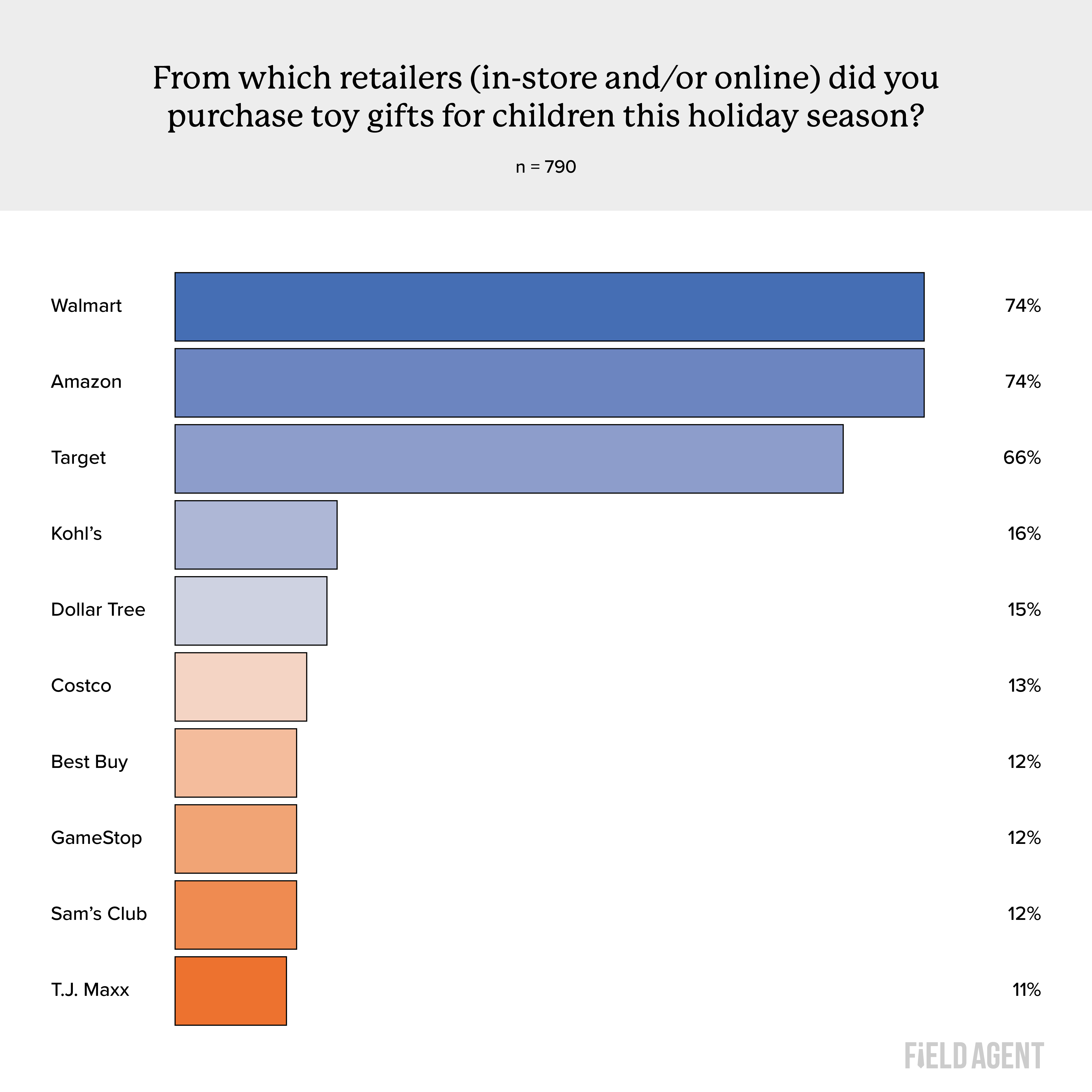 Target captured third spot at 66%, followed by a precipitous drop-off to fourth place and beyond.

And what about online purchases of toy-gifts?

This question we asked somewhat differently. Instead of multiple choice, we asked “On which one app/website, if any, did you purchase the MOST toy gifts this holiday season?”

Of 712 holiday shoppers who qualified for the question, 60% indicated Amazon received the lion’s share of their online toy-gift dollar while Walmart got 19% and Target 16%.

Not to suggest brick-and-mortar toy-gift shopping wasn’t of first-order importance during the 2022 holidays.

A quick look at the survey data, and more than 9-in-10 (91%) holiday shoppers who purchased toy-gifts during the 2022 holidays (n = 790) said they did so through at least one brick-and-mortar store.

For toys at least, it’s brick-and-mortar AND online.

In fact, one-quarter of respondents (24%) visited five or more physical stores to purchase toy-gifts for the kids in their lives. And 6% of them – you know who you are – are still soaking their feet because they visited eight or more B&M stores.

The holidays offer a high-stakes, action-packed arena for learning about shoppers – and how retailers and brands can serve them better. For instance, from this survey research we learned…

But what do you do with such insights?

Act on them – during the holidays; during other critical selling seasons; and, in some ways, every day throughout the year.

The Plum retail-solutions marketplace makes it easy to act.

If it helps you win at retail, during the holidays and throughout the year, it’s probably on the Plum Marketplace.

It’s a revolution in retail solutions.