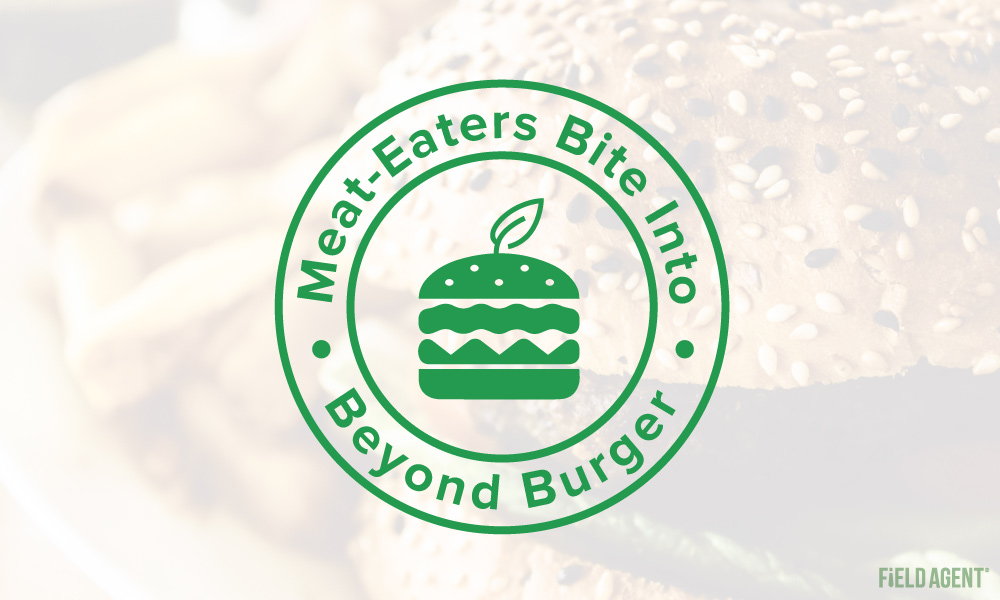 Beyond Meat is truly enjoying a lot of flattery right now, from investors, media outlets, and companies alike. Even major fast food chains like Burger King, Carl's Jr., and Dunkin' are now including plant-based meat substitutes on their menus. 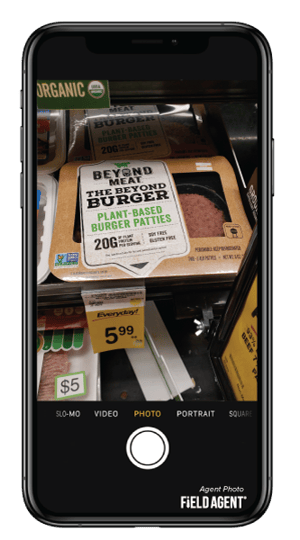 But beyond Wall Street, how will plant-based meat substitutes fare where it really matters: with everyday folks on Main Street?

Vegetarians and vegans have of course long supported plant-based meat substitutes, but by far the biggest area for market growth is among meat-eaters.

This weekend, retail-audit and insights firm Field Agent sent 50 meat-loving agents* to stores, where they purchased Beyond Meat's "Beyond Burger" patties. They then returned home, cooked up the their plant-based burgers, and gave them a taste. Field Agent captured the whole thing in video and photos, and we also posed several questions to participants.

We split the sample of 50 meat-eaters right down the middle, with half reporting they're "open" to the idea of switching to plant-based meats and half saying they're entirely "closed" to the notion. No participant had tried a Beyond Meat product prior to this study.

Watch the video below to see their initial reaction to Beyond Meat, then read on for additional insights from this unique study.

At First Bite: Reactions to Beyond Meat

Altogether, Beyond Burgers by Beyond Meat received average-to-good ratings from our sample of 50 meat-eating, Beyond Meat newbies. On a scale from 1-5, with 5 "excellent" and 1 "poor," participants assigned the plant-based meat substitute the following ratings:

And while such ratings are important, they give us little insight into perhaps the most important question: How do Beyond Burgers compare to real-beef burgers?

Of course, Beyond Meat may measure success a little differently than other products. After all, as a meat substitute, Beyond Meat may count it a win when consumers consider the plant-based burger simply as good as real-beef burgers. They don't have to be better necessarily.

Here's how our sample responded to the question, "How would you compare Beyond Meat's plant-based Beyond Burgers to regular beef burgers, on the following dimensions?" 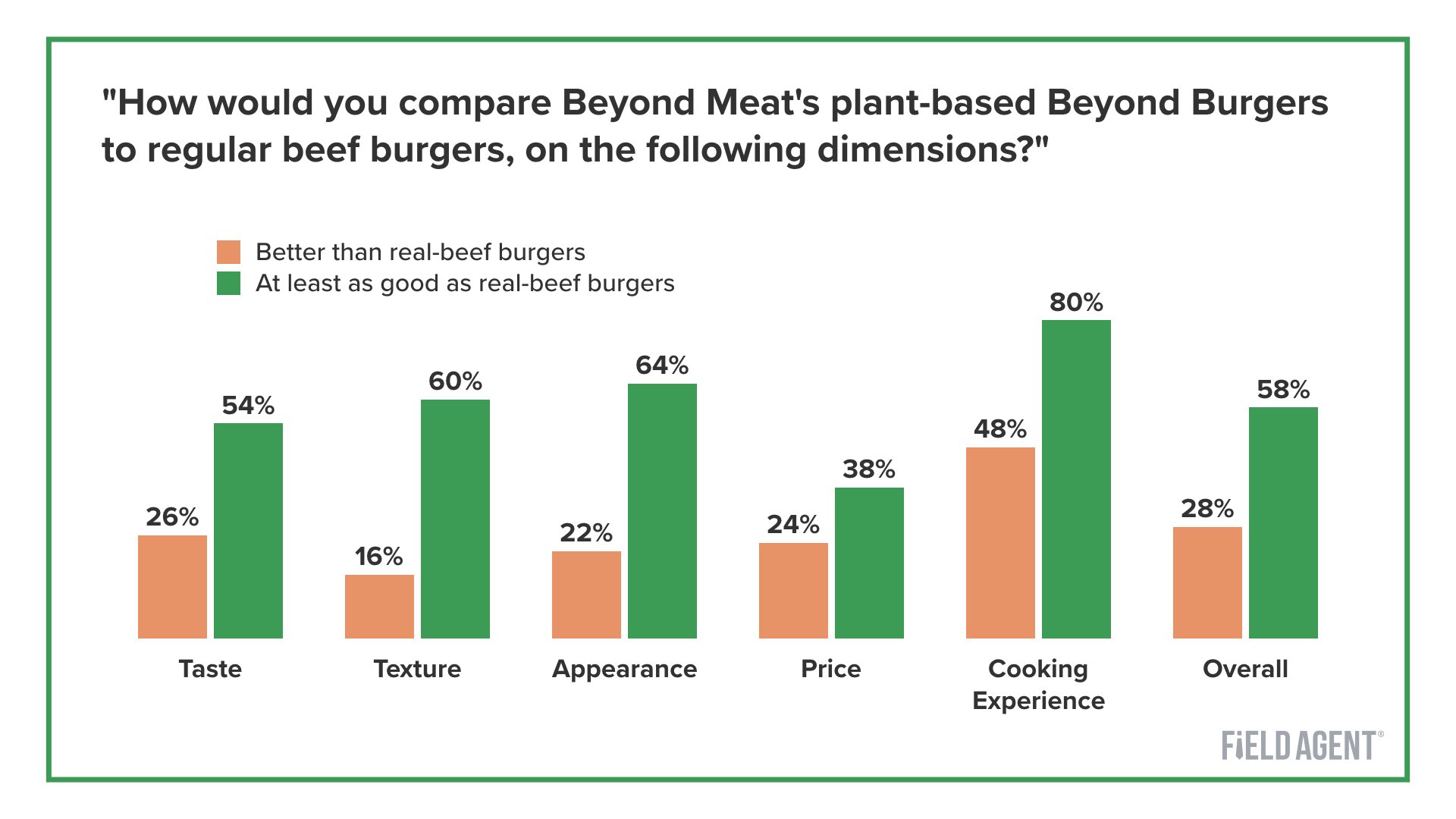 Thirty-two percent of participants said they're completely or very likely to buy Beyond Burgers again in the future, while 50% said they're at least moderately likely to do so.

Altogether, in this taste test of Beyond Burgers, just over half of meat-eaters felt the new plant-based meat substitute is overall just as good as real beef burgers, which, all things considered (e.g., sampling meat-eaters), tastes like a small victory for Beyond Meat.

Discussion: Criticism & Praise of Beyond Meat 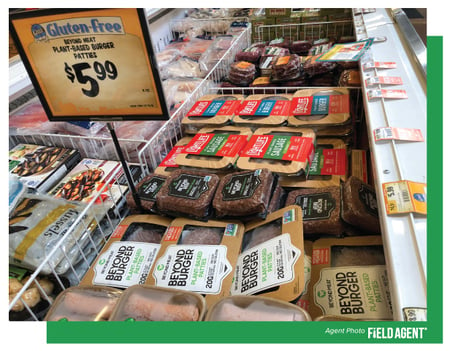 A few criticisms were frequently cited, mostly when comparing the uncooked Beyond Burger to regular beef hamburger.

Several commented that the raw, meatless burger's smell, texture, and color were all slightly different from a beef hamburger, which made some agents skeptical. The white flecks of coconut oil, intended to resemble the fat marbling of raw hamburger, also raised some eyebrows.

Consider a couple of verbatim comments:

"The Beyond Burger exceeded my expectations except in one area. The smell when raw and while cooking is very off-putting."

"At first I was hesitant because the raw burger looks a bit like silly putty. But after it is cooked, it looks exactly like beef and tastes almost exactly the same."

Once the burgers were cooked, agents praised their similarity to real beef burgers, especially in texture and when combined with condiments and other ingredients.

The Beyond Burger shined brightest when compared with other plant-based burger patties. Nine of fifteen agents who had tried Beyond Burger's meatless competitors rated it "better" or "much better" than the competition.

As one participant said, "The best plant-based burger, but not as good as beef."

It seems, then, that even everyday folks, beyond the conference rooms and trading floors of Wall Street, are impressed with the taste, texture, appearance, and preparation of Beyond Meat. Perhaps they're not ready to abandon real beef, yet most in our taste test were pleasantly surprised with what Beyond Meat has accomplished.

Plant-based proteins are just one way the grocery industry is adapting to the tastes and needs of future generations. For more insights into the "next generation" of grocery shoppers, see below for our free report, Grocery Shopping with Gen Z!