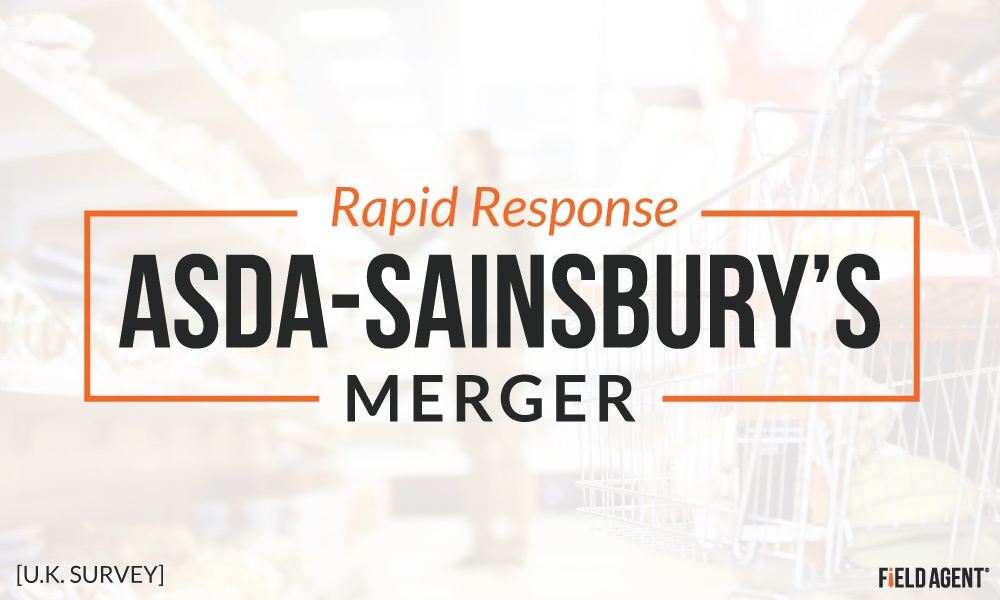 Call it a royal wedding. Sainsbury’s and Walmart’s Asda are headed for the altar.

News of the union, which proposes to marry two of the United Kingdom’s largest merchandisers, made immediate waves this weekend—waves felt clear across the Atlantic, with major implications for Walmart’s strategic trajectory.

By bringing together the market’s #2 and #3 grocers, the U.K. now has a new “biggest” retailer, and all it took was $10 billion in cash and stock options.

All of this to say, Asda-Sainsbury’s is a big deal. One that’ll consolidate 2,800 stores under the same spacious roof.

But what, it remains to be seen, do Asda and Sainsbury's shoppers think about the merger, which now only needs to clear regulatory obstacles?

That is the question.

This morning, Field Agent, with operations in the United Kingdom and seven other countries, ran a "rapid response" mobile survey. By noon, 1,114 U.K. shoppers had given us their feedback. The sample included 700 Asda and 700 Sainsbury's shoppers. This study was conducted with global consulting firm Accenture.

Most of all, we wanted to know how shoppers expect the merger to influence their shopping routines.

Below we offer a five-question Quick-Fire Q&A with U.K. shoppers about the Asda-Sainsbury's merger.

1. Are Asda-Sainsbury's shoppers even aware of the merger?

Absolutely. In Field Agent's survey, 9-in-10 U.K. shoppers said they were aware of the news.

2. Do shoppers expect the merger to be good or bad for shoppers, ultimately?

Shoppers in the United Kingdom are torn. Some 44% believe the merger will be mostly positive for British shoppers, while 31% predict it will be mostly negative.

3. How will the merger influence the shopping levels of Asda-Sainsbury's patrons?

As the graph clearly shows, the majority of Asda and Sainsbury's shoppers don't expect the corporate marriage to influence their shopping levels one way or the other.

4. In what ways do Asda shoppers expect the merger to influence the retailer?

We asked Asda shoppers what, if anything, they expect will change at Asda following the merger.

On a positive note, 51% anticipate a wider range of products on the shelves. Some Asda shoppers also expect positive changes to the quality of its produce (37%) and its online-shopping capabilities (34%), which overall will lead to Asda having a better brand reputation according to nearly half the Asda shoppers (48%).

Negatively, however, 25% think the merger will adversely influence prices overall and even more (34%) expect a negative impact on price promotions at Asda.

5. And how do Sainsbury's shoppers expect the merger to affect that retailer?

Once again, in a positive sense mainly.

More than half, 52%, of Sainsbury's shoppers believe the merger will result in lower prices offered by the retailer. Likewise, 45% expect better price promotions from now on.

Sainsbury's shoppers also sense positive implications for the range of products carried (41%) as well as the retailer's online-shopping capabilities (26%).

Some 26%, on the other hand, expect the merger to negatively affect Sainsbury's brand reputation, and 16% are concerned about the quality of its produce.

Following the merger, the results from this survey suggest:

In conclusion, we invited shoppers to send messages to the CEOs of Asda and Sainsbury's. Although the statements below are direct quotes from single respondents, they were selected on the merits of their representativeness of the sample as a whole:

"Prices should remain competitive, but farmers and suppliers should be given a fair deal."

"My message would be, to stay true to your brand. It is recognised as affordable quality, don't increase prices. Rather, create space for Sainsbury's to retain a quality brand at more affordable prices."