Where most of us would see just an ordinary sales floor, the nation’s largest retailer may see untapped advertising potential.

A Walmart store in Bentonville, Arkansas is presently experimenting with LED projectors that cast color advertisements onto the sales floor. At the moment, the store has three such projectors installed, each located in the store's toy department. 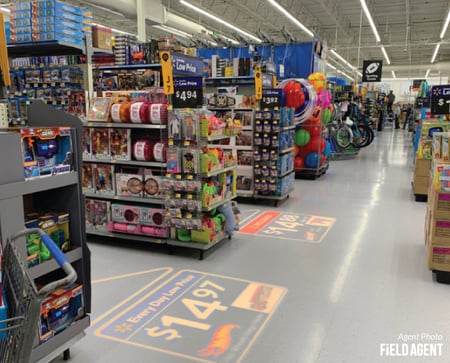 And the ads are getting attention. As one of our agents said, "The LED lights were very popular...Lots of shoppers commenting on them while walking by."

With more than 5,000 Walmart stores across the country, and an average square-footage of approximately 150,000, we could potentially be talking about a lot of advertising space here.

One you walk on.

Take a look at the video and photos below, and scroll further down to read shopper feedback.

Is the future bright for Walmart's new LED advertising system? That will ultimately depend on shoppers.

So for a very basic indication of shoppers' feelings about Walmart's new LED ads, we asked the four agents who participated in this job to answer some questions for us.

1. How would you describe the new LED ads you witnessed at Walmart today? 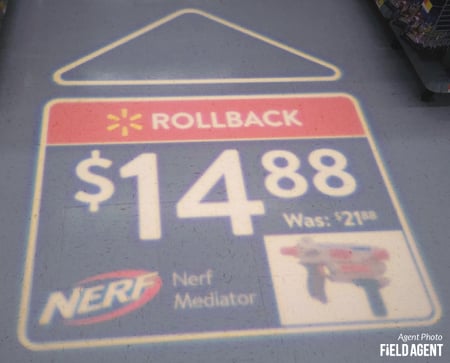 "The LED light signs on the floor are very eye-catching! If I had my kids with me, it would be very appealing to them as well."

"They're cool. Definitely grab your attention and make you want to check them out. The kids loved them."

"I think it's a good [way] to attract me to see the price and product without going inside the aisle...It should focus on sale prices rather than original price to convince me to buy it."

2. What words would you use to describe Walmart's LED ads?

3. How influential would the LED ads be over your in-store purchases?

For this question, we asked agents to assume the LED ads are being used at the store where they prefer to shop and are being used for products they would be in the market to buy.

Two agents said the LED ads would be "very influential" over their in-store purchases, while the other two said they'd be "moderately influential."

4. Which would be more effective—LED ads or conventional, non-digital signs—at the following?

In all, not a bad start for the new LED advertising technology. Of course, time will tell whether Walmart rolls the technology out to additional stores, and how shoppers respond en masse.