Seems like all the cool kids are announcing membership services.

Best Buy is the latest in a string of retailers to introduce a new membership program, following in the footsteps of Amazon Prime, Walmart+, and others. The service, Best Buy Beta, is rolling out in select markets around the country.

Though Best Buy Beta is not yet widely available, its list of benefits has been made public. We were curious: how do shoppers think they would use these benefits? Using the Field Agent platform, we surveyed 1,000 real shoppers (we call them agents), presented them with Best Buy Beta's list of benefits, and asked them for their thoughts.

First question: of our 1,000 agents, how many are already Best Buy customers?

Turns out, most agents surveyed visit the store occasionally, with 85% claiming to shop at least once a year. The biggest share of the sample (37%) visits the retailer every few months. 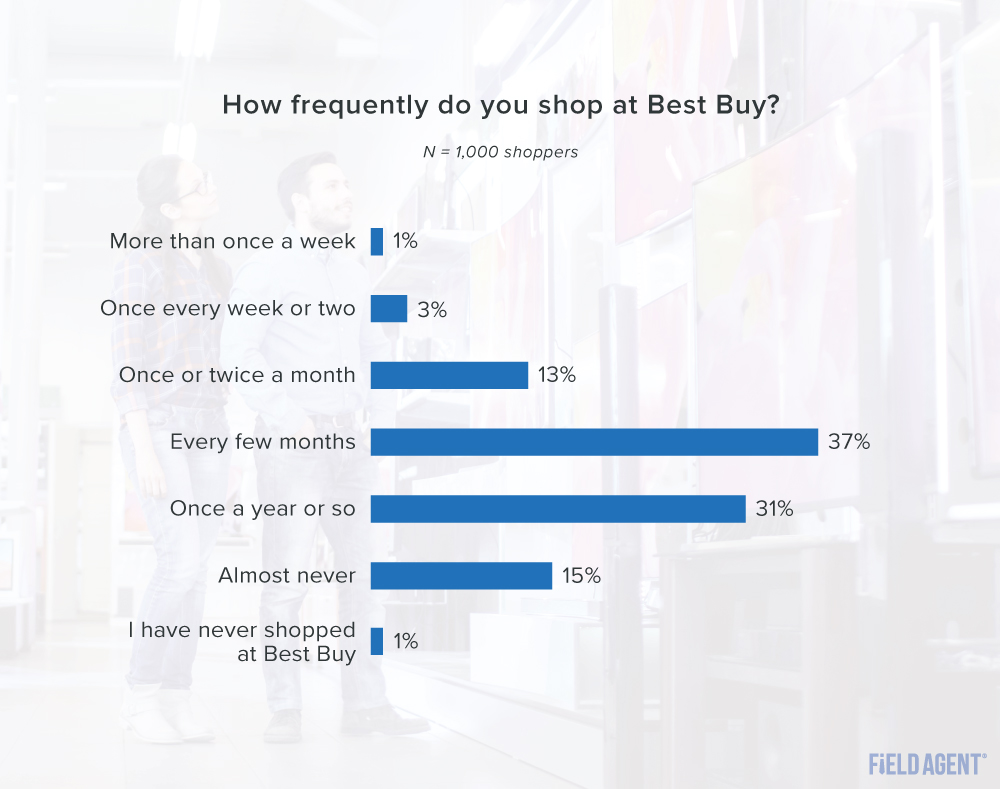 Once we identified the agents who actually shop at Best Buy, it was time to introduce them to Best Buy Beta. The service is in the first stages of rolling out - only 10% of our agents had heard of the program before taking the survey.

We introduced the shoppers to each benefit in turn, then asked them a few questions about how much they would use each benefit (if they were to get a subscription).

First up: Best Buy Beta members have access to a "concierge service," a 24/7 resource that provides advice and support about purchases, installations, etc. Using this service, shoppers can also schedule service and repair on Best Buy purchases.

This was an attractive option to most agents surveyed. Of our Best Buy shoppers, 72% said that they would use this service if they were to purchase a membership - and of those, 46% were likely to use it at least once a month. 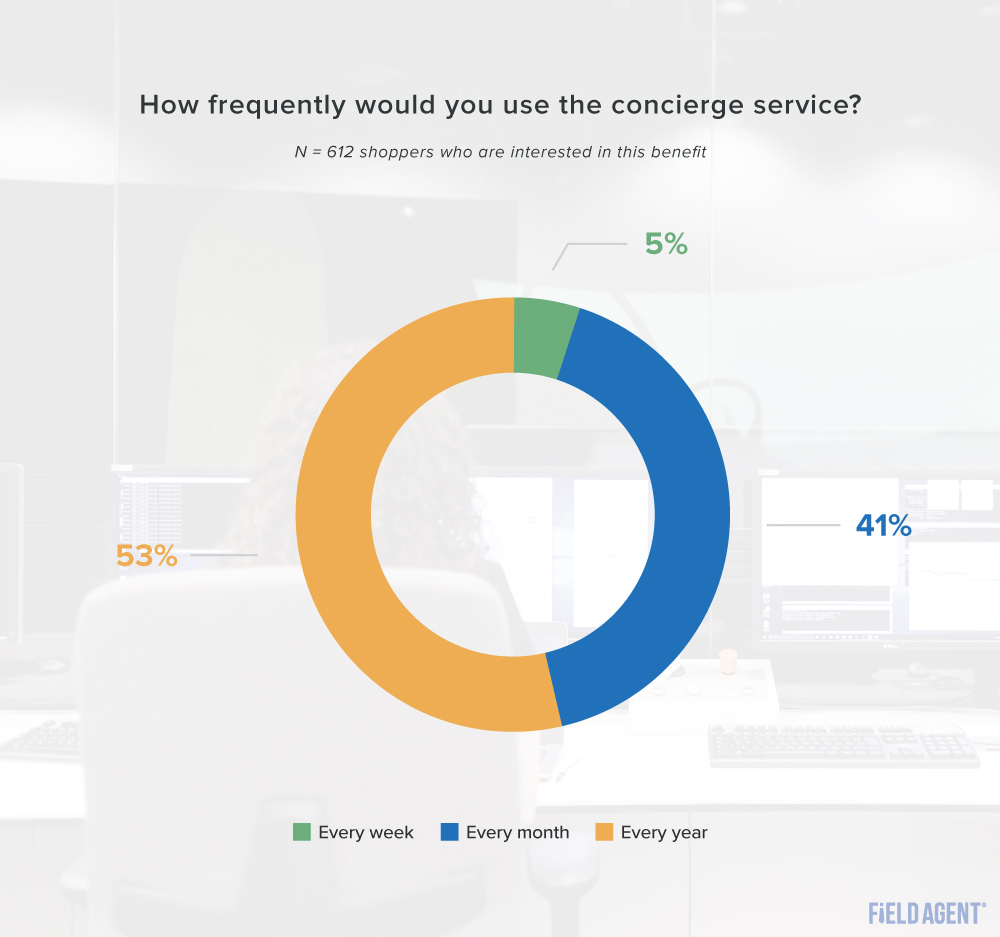 What about the shoppers who were not interested in this benefit? Most said that they (or a family member) were tech-savvy enough to solve their own problems. Fair enough!

Once we had found agents who shop at Best Buy at least once a year, we asked them how often they use the retailer's "Geek Squad" tech support services. 36% said that they had never used the service, while 28% claimed to visit Geek Squad about once a year or more. The rest "rarely" have need of the Squad.

Best Buy Beta members are able to access Best Buy's "Geek Squad" tech support at any time, for free. In addition, delivery and installation of Best Buy purchases are available free of charge.

It seems that shoppers expect they would take many more problems to the experts if they were already paying for the privilege. 84% of our agents said that they would use Geek Squad services if they had a Best Buy Beta subscription. A few even said they might use it weekly.

Those who weren't interested cited similar reasons as those who turned down the concierge service. Many shoppers simply trust their own expertise when it comes to tech challenges.

Besides Geek Squad and the new concierge service, Best Buy Beta offers a small range of other perks, including an expanded return window, extended protection on purchases from the retailer, and special pricing for members.

Since these benefits apply to most Best Buy purchases, shoppers found them very appealing. The vast majority of our agents expect that they would use them if they had a membership. 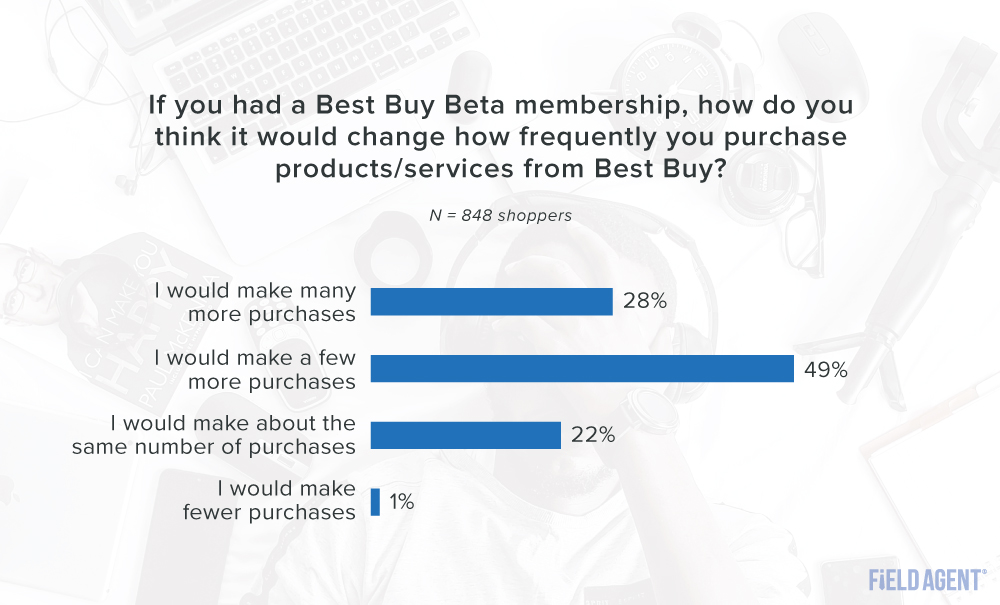 Hear From Your Shoppers

What answers do you need from your shoppers? No matter your brand, you need to know what your customers are thinking.

Field Agent's Shopper Insights products allow you to be in the moment with your customers. Shop along with real people as they make purchasing decisions. Capture authentic perspectives about your products (and your competitor's). Or work with our helpful team to build a custom job to meet your specific challenge.

"I was blown away by the Field Agent platform! I found it to be incredibly effective turn-key way to get our product in the hands of key customers. This is an entirely new level!" -Kelly Reilly, CEO, Red Thread Coffee

Online Ratings & Reviews: How Important Are They To Your Category?