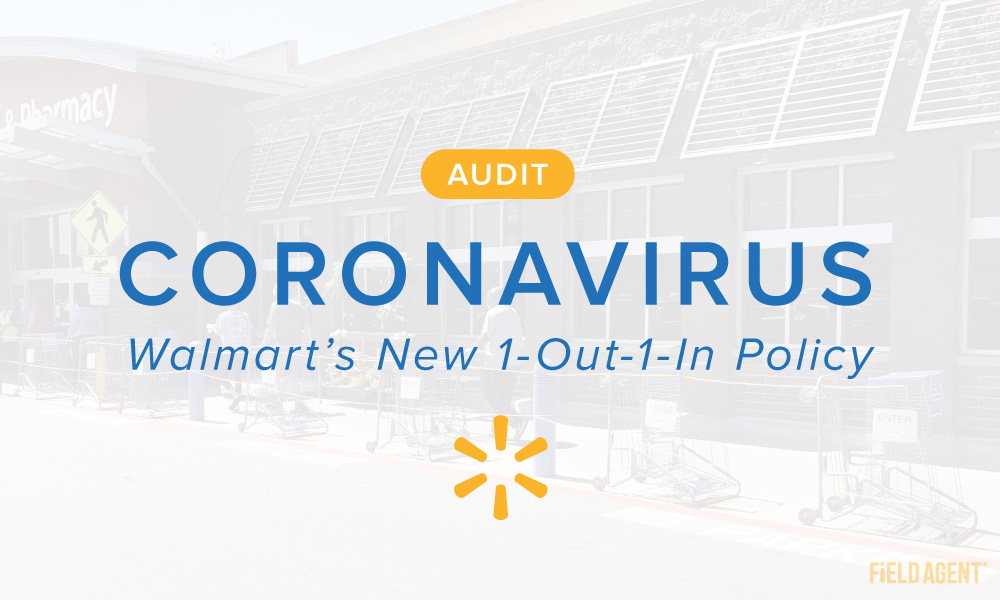 With COVID-19 cases escalating across the United States, the nation’s largest retailer has taken definitive steps to limit interpersonal contact in its stores.

Taking effect this past Saturday, Walmart’s new store admittance policy is intended to limit foot traffic inside stores to no more than five shoppers per 1,000 square feet, or roughly 20% of store capacity. 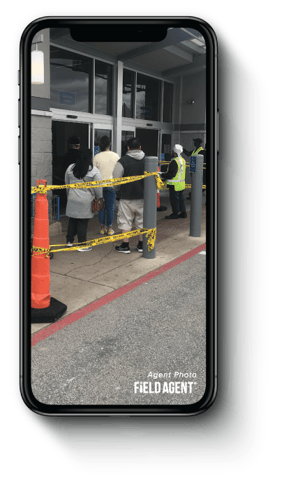 Accordingly, Walmart stores across the country—upwards of 5,000 in number—have demarcated areas to usher and meter arriving guests through a single point-of-entry.

When a store reaches approximately 20% capacity, Walmart then begins admitting guests on a “1-out-1-in” basis (i.e., as a guest exits, one is permitted to enter).

Such a sweeping new policy got us at Endcaps & Insights wondering...

Free Guidebook: 9 Coronavirus Challenges At-Retail...and How to Overcome Them

On Saturday, the Field Agent platform audited the entryway of 106 Walmart stores coast-to-coast. Conducted throughout the day, our objective was to understand Walmart’s new 1-out-1-in policy from the shopper’s crucial point-of-view. 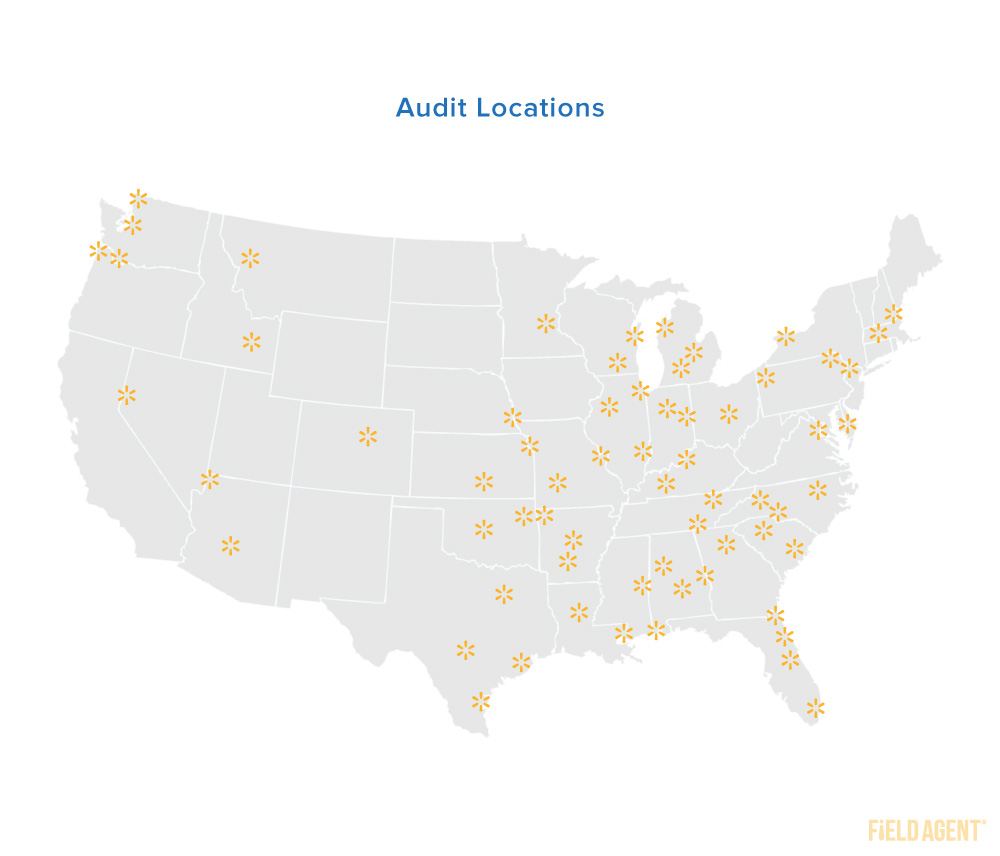 As you'll see, agents were instructed to capture photos of processing queues, signage, and the like outside their designated Walmart stores. Participating agents also took the opportunity to share their thoughts about the processing area.

Below we answer four questions about Walmart’s new 1-out-1-in policy.

Results: Answers to 4 Questions about “1-Out-1-In”

The photos below offer a generally representative look at processing areas.

Most stores in Field Agent’s audit wrapped yellow police tape around orange traffic cones or upturned shopping carts, forming a makeshift alley by which shoppers can enter the store or, in some cases, wait in line for admittance. Signs can be spotted up, down, and around the queue with the message “please keep at least 6ft apart.”

Where needed, the processing area also includes a tent for keeping employees protected from inclement weather.

For Walmart stores with two entrances (i.e., grocery and general merchandise), the grocery entrance was almost exclusively set up as the entry-point, with the merchandise “entrance” serving as the designated exit point.

For the most part, really, no.

Of 106 stores audited by the Field Agent platform throughout Saturday, agents reported lines on the outside of only 17 stores.

So, no, on the first day of Walmart’s 1-out-1-in policy, lines were at worst very manageable and at best a complete non-issue.

But in these 17 cases, the single, longest line contained somewhere between 31-40 shoppers, while three other lines contained 21-30 shoppers.

Audits suggest only three of 17 lines took longer than 60 seconds to process “another shopper” (i.e., the next in line).

So, even where lines did exist, processing was relatively painless for shoppers.

4. Did the processing area make shoppers less likely to go inside?

In all, 56 of 106 participating agents said that, prior to arriving at Walmart, they were either already planning to go inside or were not sure if they would go inside.

Of these 56 agents, 19 said the scene they witnessed outside their assigned store made them less likely to enter, while 17 said what they saw made them more likely. The remaining 20 were neither more nor less likely to go inside.

One shopper who indicated being less likely to enter the store said, “To see all the signs and the entrance is blocked off and associates counting people, it’s just a little scary and eerie."

But another shopper, one who said she’d be more likely to go inside after seeing the processing area, commented, “I would go in because there’s no line and it looks like Walmart is taking additional steps to protect my health.”

Altogether, then, this audit suggests the 1-out-1-in policy at Walmart stores nationwide is not greatly affecting the shopper experience with long lines and waits outside stores. Not on the policy's first day of implementation, anyway.

But there's much more to be said about retail and shoppers in the wake of the coronavirus outbreak. Subscribe to Endcaps & Insights (below) to stay in-the-know.

Endcaps & Insights is where retail headlines come to life through fresh insights, illuminating photos, and curated videos. It's a great place to stay up-to-date on the latest happenings across the retail industry. Subscribe below!