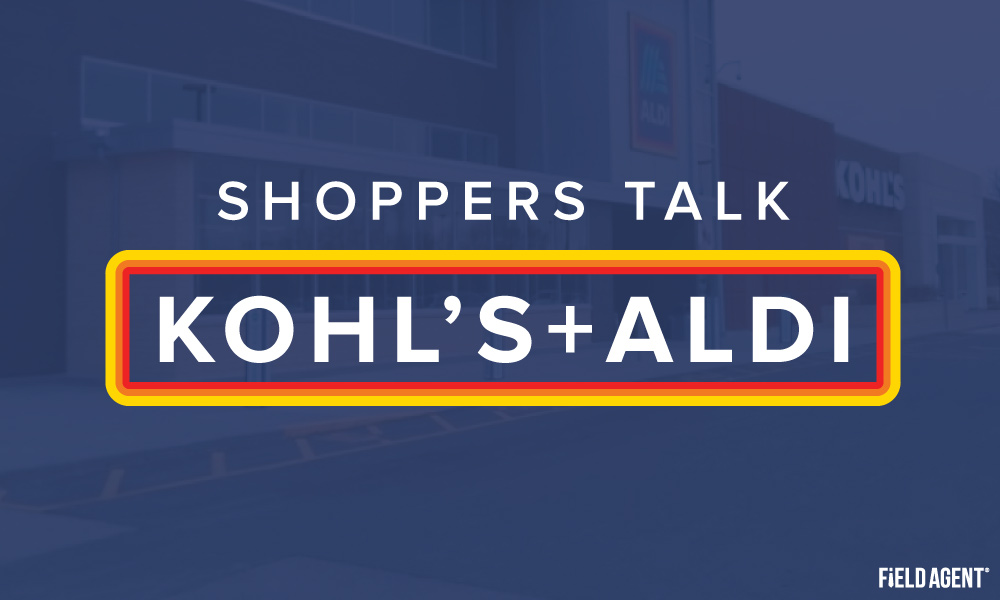 It was just about this time last year.

Kohl’s announced it would lease floorspace to discount-grocer Aldi at as many as 10 existing Kohl’s locations, effectively reducing the department store’s increasingly lanky-for-the-digital-age footprint and, in theory, channeling additional traffic into Kohl’s stores. CEO Kevin Mansell said the move would empower Kohl’s "to achieve further inventory reductions and margin acceleration."

The announcement was met with wide-eyes by many in the business community, some interpreting the strategic marriage of a popular department store with a discount grocer as a game-changer.

Now, with the first dual Kohl’s-Aldi open in Waukesha, Wisconsin, it’s prime time to consider what shoppers think about this arrangement between two NRF top 25 retailers…and whether Kohl’s strategy will pay off for the department store and its new grocery partner.

How will the next generation of shoppers affect grocery-retail? Download Field Agent's Free Report: Grocery Shopping with GEN Z

Talking with Shoppers About Kohl's-Aldi

Below we offer a 6-question QuickFire Q&A from these efforts. 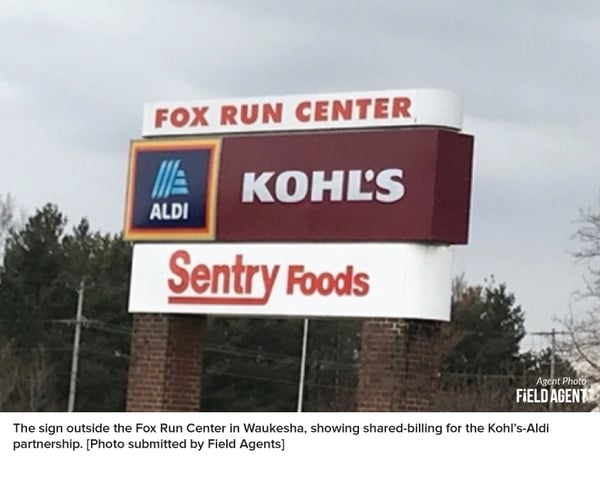 1. Just how shared is the Kohl’s-Aldi “shared space”?

The joint Kohl's-Aldi location has been referred to as a “shared space,” which got us wondering to what extent Kohl’s-Aldi is one store, two separate stores, or somewhere in between.

The five on-the-ground agents we sent to the new Kohl’s-Aldi in Waukesha were in total agreement: these are two separate stores. After seeing the shopping area firsthand, one agent said, “I wouldn’t really consider this a shared space.”

Indeed, we posed the following question to our five mystery shoppers: “On a scale from 0-10, where 0 is "entirely segregated" and 10 is "entirely integrated,” how segregated/integrated is the Kohl's-Aldi you visited today?”

Just to clear things up.

Let’s get to the Goldilocks question—are the stores too big, too small, or just right?—before moving on to some of the results of the larger survey.

Field Agent asked all five mystery shoppers dispatched to the new Kohl’s-Aldi location to visit and look around both retailers. Then we asked their opinion about the size of both stores:

But to understand the larger implications for Kohl’s and Aldi, let’s turn to our survey of almost 3,000 shoppers. 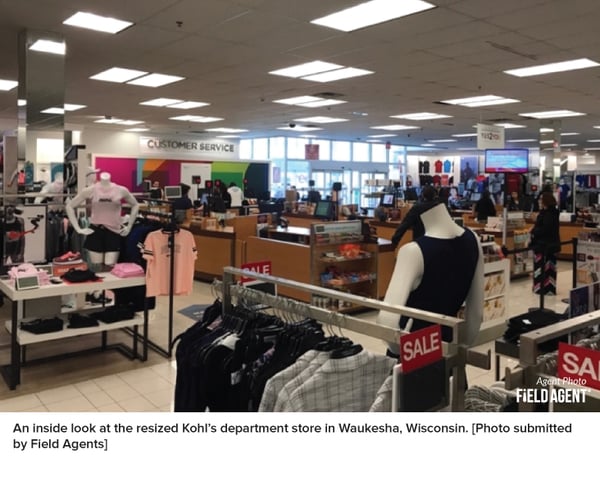 3. How do current Kohl’s customers feel about the conventional size of Kohl’s stores? And Aldi customers about Aldi stores?

In our larger survey of 2,957 shoppers, we posed the following question to 1,788 Kohl’s shoppers: “How do you feel about the typical, conventional size of Kohl's stores?”

We posed a similar question to 1,365 Aldi shoppers.

Sixty-percent said the “typical, conventional” Aldi store is neither too big nor too small. But, notably, 37% said Aldi stores are generally too small, and only 2% said they’re too big. 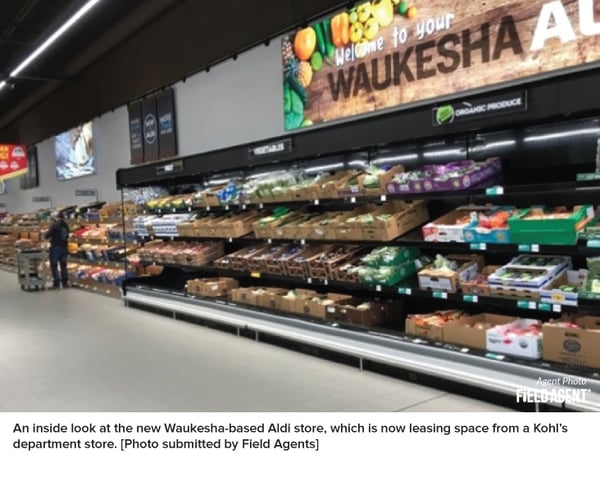 4. How do Kohl’s shoppers feel about the department store’s decision to reduce the size of its stores?

The phrasing of this question is important. We asked Kohl’s shoppers (n = 1,788), “In general, which one emoji best captures how you would feel if the Kohl's department store where you shop the most reduced its floor space and inventory by about 30%?”

That’s right, emoji. I mean, isn’t it a preferred method among Americans for expressing feelings?

Here are the top five responses:

But although the survey results suggest some Kohl’s shoppers may not exactly like the idea of smaller Kohl’s stores, the survey also reveals some promising news for the department store and its strategy.

5. Yeah, but will the close proximity of Kohl’s to Aldi net more footfall for the retailers?

First, let’s consider the question generally. The first question we posed to all 2,957 respondents, before even a mention of Kohl’s or Aldi, was as follows: “Imagine a popular grocery store and popular department store located immediately next to each other in your area. How likely would you be to shop both the grocery store and department store on the same shopping trip?”

The results were favorable for Kohl’s and Aldi.

We asked the full sample of 2,957 shoppers how much more or less likely they’d be to shop Kohl’s department store if it was located beside an Aldi.

Virtually half, 49%, said they’d be more likely to shop at Kohl’s, if an Aldi was its next-door neighbor. As one shopper said, “I typically don’t shop at Kohl’s…but being next to Aldi as a regular store I visit, I’m more inclined to stop in at Kohl’s.”

Another 45% said they’d be neither more nor less likely to shop at Kohl’s with Aldi beside it.

Flip the script. What about Aldi?

Fifty-two percent of shoppers said they be more likely to shop at Aldi, if it were directly next to a Kohl’s department store. Another 43% would be neither more nor less likely.

“If I happened to need something at Kohl’s,” one respondent said, “I’d almost for sure stop in Aldi to get something. I always need SOMETHING from Aldi.”

Good news for Kohl’s, Aldi, and the new alliance. 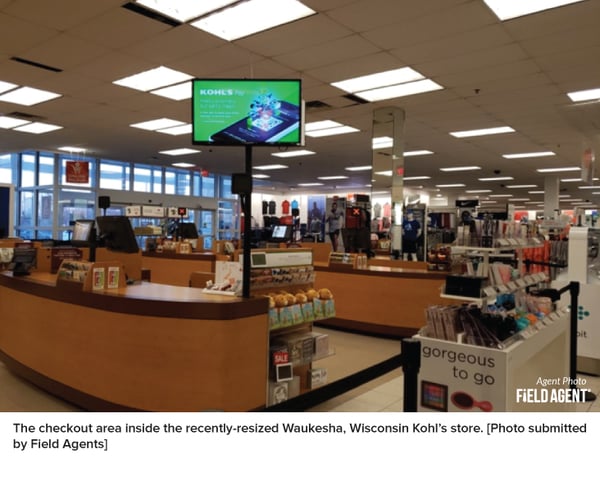 6. Moving forward, which retailer would shoppers MOST like to see beside Kohl’s stores?

It’s no secret. Kohl’s is in experimentation mode and wants to test this "good neighbor" strategy with other retailers. Indeed, recent headlines suggest Planet Fitness will soon start renting space from Kohl’s.

So the question becomes: If shoppers could have one retailer directly next to Kohl’s, who would it be? 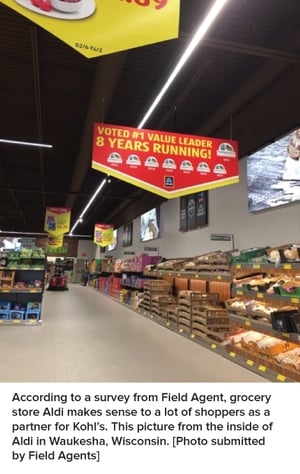 The survey suggests Aldi is a good fit for Kohl's, that is, from the shopper’s perspective.

Checking Out: What We Learned

Entering this dual mystery shop-survey, we weren’t exactly sure what to expect from the new Kohl’s-Aldi alliance. On the ground, would we effectively find two retailers operating as one, or simply two separate stores with little-to-no operational integration? Based on images and information supplied by our mystery shoppers, the latter appears closer to the truth.

And what about the survey of 2,957 shoppers? What did that tell us?

In theory, many shoppers love the idea of shopping a popular department store and discount grocer in one fell swoop.

In the Bag: How RIND Racked Up New Customers [Case Study]

Learn From the Best: How Top Brands Drive Trial