Mobile Banking: Which APPS are Paying Dividends for Banks? [Survey]

Smartphones are just about everywhere.

But what will you find on these millions of smartphones?

Somewhere, perhaps lost in the crowd of social media, music, and shopping apps, you’re likely to find one or more personal banking apps. 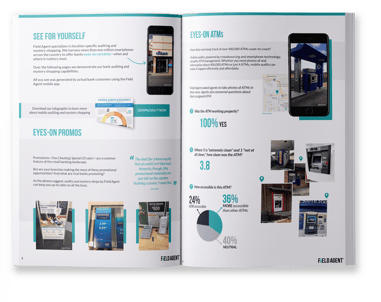 Free Case Study: How retail banks are capitalizing on the smartphone revolution

Today, after all, we’re increasingly banking through our smartphones, which naturally leads to some questions:

To explore these questions and others, auditing and insights firm Field Agent surveyed 2,363 smartphone owners*.

Below we offer the results as a six-question QuickFire Q&A.

1. Which banks have the most popular apps?

Field Agent asked smartphone owners, “Which banks’ mobile apps do you currently have on your phone?”

Forty-six percent of respondents selected “other” for this question—a category which, in this case, encompasses local banks, regional banks, and credit unions.

2. But which banks have the most “mobile-connected” customers?

The results from the previous question may, however, reward banks with the largest customer bases. In other words, the more customers a bank has, the more likely their apps will be on a proportionately greater number of smartphones.

But Field Agent also asked survey respondents to identify the specific banks with which they have active checking and/or savings accounts. This allowed us to determine which banks have the most “mobile-connected” customers. 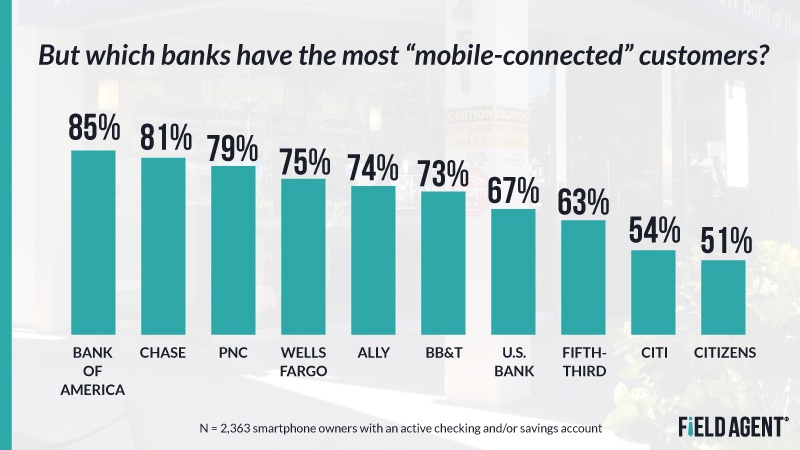 3. How many smartphones actually contain a banking app? 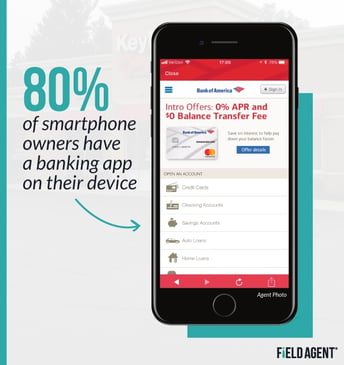 The vast majority (80%) of smartphone owners reported having at least one mobile banking app* on their devices.

*For this survey, “banking app” refers only to mobile apps operated by specific retail banks. Examples include Chase, Bank of America, and Wells Fargo. “Banking app” is not a reference to other types of financial apps.

4. How many smartphones have more than one banking app?

Thirty-two percent of smartphone owners have more than one banking app on their devices—which means Chase and Bank of America, or some other combination of banks, may be cohabiting every third phone out there.

Nine percent of respondents have three or more retail banking apps on their phones.

5. Do Millennials have banking apps on their smartphones?

In our survey, Millennials were more likely than non-Millennials to have banking apps on their smartphones. Some 84% of respondents ages 18-37 (n = 1,061) reported having such an app on their devices, compared to 78% of those older than 37.

6. Why do Americans use banking apps?

Among respondents with at least one banking app on their phones (n = 1,899), 9 of 10 said they use these apps to check their account balances. 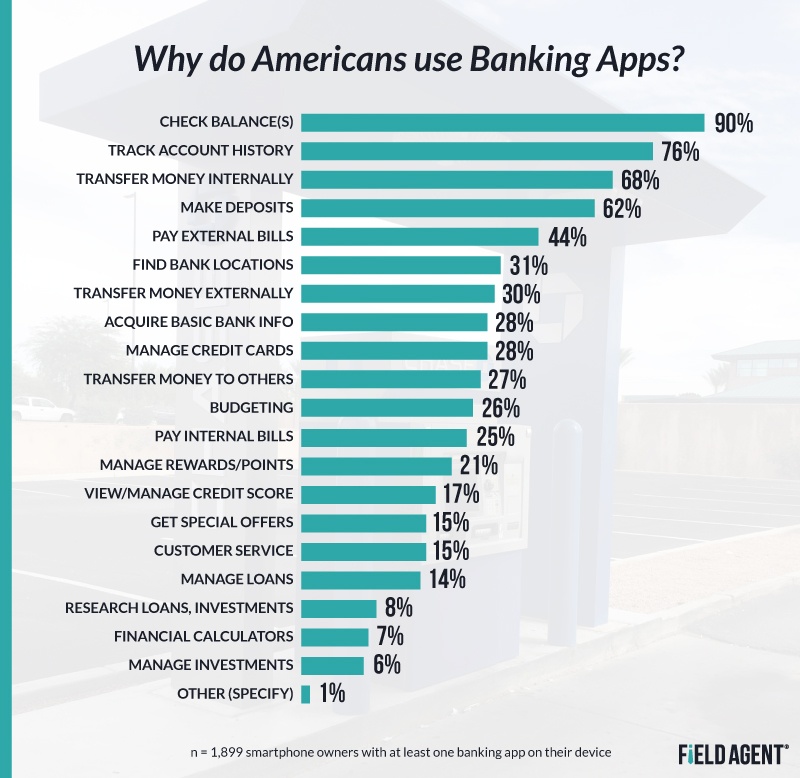 Smartphones are making it easier than ever for banks to manage their widespread retail operations. Download the free case study, "Banking on Success: How Smartphones Offer 'Eyes-On Certainty' to Retail Banks," to see how Field Agent helps banks take control of their business.